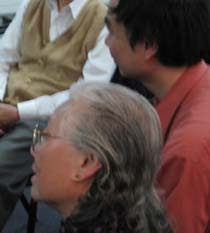 These lovely people, again, today, in Ashfield. The old lady in the pic has dementia and, as I wrote last week, they are active in the Cadigal room, which is part of Ashfield Municipal pool, each Tuesday. I like this photo. Each of the four women with dementia has a male carer. In the case of this woman, it's her son (also in pic).

I picked Karen up from near her flat at 1pm and the first thing I noticed was the perfume. Then the short, yellow skirt. The red scarf and matching red top. The red shoes I'd notice only later, when we got to Ashfield. Why the gear?

The session today was slightly different, but the goal was the same: write a profile about a woman with dementia. As before, I took photos only in profile so the women would not be singled out in the community for being different. Karen chose, not this woman, but the one who calls herself Mary. As before, she asked me my name.

Just before we got to the pool, Karen told me the Japanese name a colleague (also Chinese) gave me when I was in Tokyo, was typically applied to people with my name. Translated literally, 'ma shu' means 'horse' and 'fix' (or 'modify', added Karen in her bright, postgrad style). What this means, however, is anyone's guess.

The exercises were the same as before. After these we sat down and, because it's the Autumn moon festival (in the Chinese calendar it's 15 August today), there is a riddle game. Of course, I couldn't follow. But they enjoyed it.

They also enjoyed it when stories were told. With dementia, your most recent memories are the first to disappear. So telling stories, with a person who does not have dementia perhaps taking the lead, allows the people with dementia to reminisce.

I asked Jenny Tsang, a volunteer who attends weekly, about the issue of regression. If, I suggested, these women gradually retreated into a past they may not have enjoyed and which, in fact, may have been full of fear or sadness (war, revolution), how did that manifest itself?

"They feel safe here, in Australia," she said. Short, but rich with significance.

I had some difficulty sitting opposite Karen due to the extreme brevity of her attire.

We didn't record voices this time. I offered the voice recorder to Karen, but she just sat in the circle and got involved with the game. She didn't focus on one of the women and talk, as she had done last time. This time, there would not be 45 MB of recordings to transcribe.

This time, we were here to enjoy the festival of the moon.
Matthew da Silva at 10:14 pm
Share